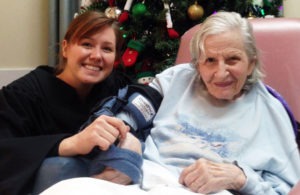 Reverend Miriam Haynes Holland paved the way for women in the ministry, serving in the late 1970s through the early 1990s as a minister in several Methodist churches throughout Florida.

Holland and her late husband had three children and traveled to Air Force bases nationally and internationally before she decided to pursue her own ministry. After her husband retired, Holland went back to school and earned her Masters of Divinity in 1976, and served as a Methodist minister for 15 years before retiring herself. Even after retirement, she and her husband remained very active in ministry. They led services for ministers who were away, and were involved in various causes including the Methodist Federation for Social Action, an organization advocating for justice in the areas of peace, poverty and people’s rights.

Holland is a longtime member of Glenn Memorial United Methodist Church in Atlanta, where she donated her ministerial robes. Reverend Blair Setnor, Minister of Youth and Outreach at Glenn Memorial, proudly wears the robes today (pictured above with Reverend Holland).