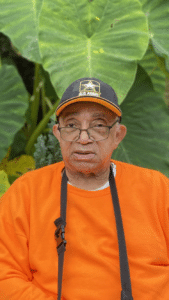 Robert Barnes, a resident at A.G. Rhodes Atlanta, vividly remembers being drafted into the Army 70 years ago. An Atlanta native, Barnes was just 18 when he was called to serve. He served in Washington, D.C. and Jackson, North Carolina.

Barnes spent several weeks in tank training at Fort Leonard Wood, Missouri, and he trained in foxholes, commonly known as “the trenches.” One of his military experiences was in Canada.

“Being from the south, the cold was an adjustment,” Barnes said.

Although Mr. Barnes didn’t see combat, he says he was ready and willing to deploy where needed. Barnes grew up with an appreciation of military service because his father also served.

Barnes learned a lot during his time in the Army, and he says that’s when he grew up.

“It gave me my independence.”

It wasn’t always easy, but Barnes says he turned to the comfort of music during his time in the military. When asked what type of music he liked, he said, “Jazz, jazz, and jazz.”

After Barnes left the service, he became a cab driver in Atlanta and married his late wife, Roberta. Barnes has three daughters and two grandchildren. 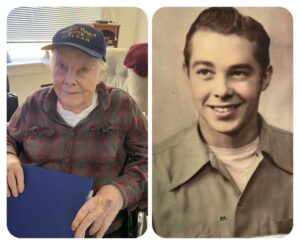 Lawrence Bushee, an elder at A.G. Rhodes Cobb, is among “The Greatest Generation.”

A World War II veteran, Mr. Bushee served with the Army in the South Pacific from 1944-1946. He voluntarily enlisted because he said, “It was my duty.” He was just 17 years old.

After Mr. Bushee completed his basic training in South Carolina, he immediately deployed overseas where he served as a technician fifth class in the infantry.

“It made me grow up quickly,” he said.

When he finished his service at age 20, Mr. Bushee went on to study mechanical engineering and work for an appliance company. He got married, and he and his late wife had three daughters. Mr. Bushee has eight grandchildren and 14 great-grandchildren.

Mr. Bushee comes from a family of veterans. His brother and three brothers-in-law served in the Air Force. During the war, he says he remembers his mother displaying five blue stars in her window, one for each family member actively serving.

Other A.G. Rhodes residents who also served include:

As we commemorate Veterans Day this year, we say thank you to Mr. Barnes, Mr. Bushee, and to all those who have served.