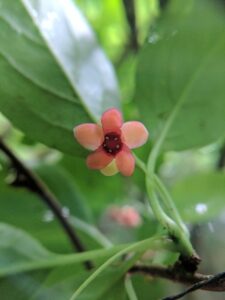 It has been several years since A.G. Rhodes nursing home residents began participating in a unique preservation effort to save the American starvine, a threatened plant found in less than 30 known sites in the United States. The most concentrated of those sites is around Emory University’s campus where one of A.G. Rhodes’ three nursing homes is located.

In 2015, A.G. Rhodes installed a starvine vineyard behind its property on Wesley Woods to allow a team that’s been researching the plant for many years—including A.G. Rhodes Horticultural Therapy Director Kirk Hines and Emory University Field Biologist and Adjunct Faculty member Carl Brown —to study the starvine in the same habitat where it’s found naturally.

While the starvine is a prehistoric plant, there are still many characteristics which are unknown. But thanks to years-long research efforts—and with help from A.G. Rhodes residents who have been propagating and potting seedlings during Horticultural Therapy sessions—the plant is thriving.

Hines recently made a major breakthrough that is contributing to the plant’s success. He figured out the starvine’s mysterious and meticulous—and lengthy—germination and cultivation process. It involves repeated and time-sensitive cycles of keeping planted seedlings refrigerated and then moving them to A.G. Rhodes’ greenhouse to grow in warmer temperatures. This combination of both cold and warm stratification takes almost two years.

“We’ve completed the process a couple of times so we know this method works,” Hines said.

Unlocking this mystery also unlocks potential future opportunities for the starvine to flourish.

“We’re considering re-introducing the plants we’ve grown back into the wild to study how they grow there, and there are partnership opportunities with other botanical gardens to see how they could grow in other areas of the country,” Hines said.

The American starvine has a long-rooted history. There are signs that the plant, which once flourished throughout the Southeast, might have been cultivated by Native Americans, and there is strong evidence that it may have been used medicinally. Hines says that even if the starvine’s role in nature isn’t completely clear, one thing is clear: it’s important to save it.

“We have no idea of how everything is truly connected,” he said. “And if one small thing that has been here since the time of dinosaurs disappears, we don’t know if there’s a snowball effect. You just never know.”

Perhaps one of the most significant outcomes of the starvine’s preservation efforts are the opportunities it presents for A.G. Rhodes residents to be involved. 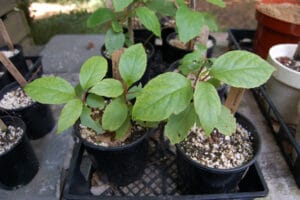 Recently, Hines held several horticultural therapy sessions with residents who helped transplant, pot, label and organize close to 100 starvine plants which will continue to be studied.

Hines said that this isn’t just about the starvine’s preservation, but it’s also about establishing a legacy, which is especially important as we age. 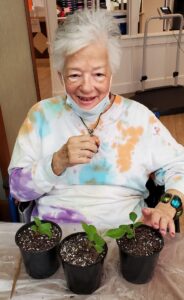 “Participating in something meaningful creates meaningful legacies,” he said. “We’re creating a legacy that will enable the starvine to continue to be a part of our entire ecosystem and environment for many years to come.”

“Well, you know how much of an Earth Mother I am. It just feels so reverent working with these tiny endangered seedlings,” she said.

Read previous stories about the starvine: